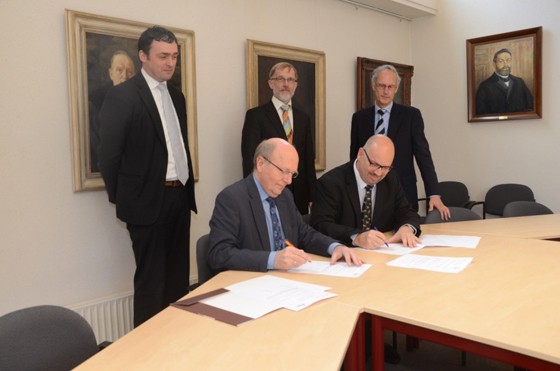 Centre of Excellence in Reformed and Evangelical Theology established

KAMPEN/LEUVEN—24 March 2014—The Theological University of Kampen and the Evangelische Theologische Faculteit of Leuven are moving ahead toward cooperating in the field of research. For that purpose, the institutions signed an agreement today.

The agreement between the two theological universities is related, among other things, to the training of doctoral students in a proposed mutually established Centre of Excellence. In recent years, mutual engagement has increased in terms of dissertation committees and in the shared awarding of doctorates; and in the near future, shared doctoral projects will be undertaken. There is already a joint-doctorate in the field headed by professors Nullens and De Bruijne, involving research into the significance of the theology of D. Bonhoeffer for environmental ethics. In the area of early Reformed theology, the TU Kampen is already working closely with the Institute of Post-Reformation Studies (IPRS) housed at the ETF.

By means of this cooperation, more possibilities will arise for people to move from ‘assistants in training’ to post-doctorate positions. In this way, junior researchers can proceed along a natural path in their academic track. By means of the Centre of Excellence, both institutions will be able simultaneously to enroll young researchers from abroad, and in this way to elevate the academic level internationally.

In addition, the agreement provides an impulse for conducting more shared research. In the academic arena, interchange between the teachers in Kampen and in Leuven has been going on for many years.

Patrick Nullens, principal of ETF Leuven: ‘The increased emphasis on publishing scientific work leads to greater specialization. It is good, then, as relatively small institutions, to make use of each other’s expertise.’

Mees te Velde, principal of TU Kampen: ‘This cooperation will be natural between the two theological universities. The ETF and the TU Kampen recognize themselves to a large extent in each other’s identity, as well as in each other’s methodological approach being followed in theological studies. Both institutions are guided by the same motto: fides quaerens intellectum (‘faith seeking understanding’), and are devoted to a theology founded upon Scripture and the Church’s tradition.’

The TU Kampen and the ETF Leuven both provide academic theological education at three degree levels: bachelor, master (of divinity) and doctorate. They work within the same framework of accreditation and teaching structure, in accordance with the requirements of the Accreditation Organization of the Netherlands and Flanders (NVAO), and are both smaller university institutions in the Low Countries.

The TU Kampen is an academic theological institute linked to the (Liberated) Reformed Churches in the Netherlands.

The ETF is an interdenominational academic institute that focuses on the broad Evangelical movement, in which both established and free Churches have a place. The international institution is located in Leuven, Belgium.