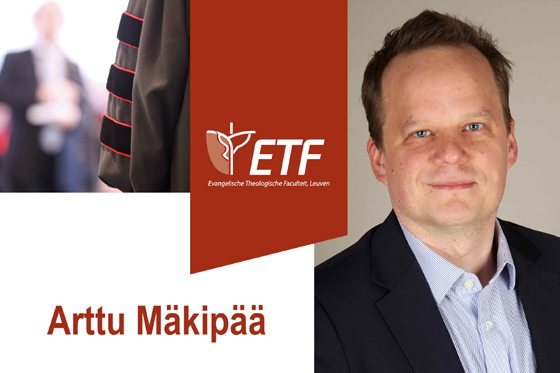 Resisting the Divide - A Theological Contribution to Economic and Social Policy

On 25 May, Arttu Mäkipää, affiliated researcher in Systematic Theology at the Evangelische Theologische Faculteit (ETF) in Leuven, will defend his dissertation on the theological anthropology of the Swiss theologian Emil Brunner (1889-1960), in dialogue with contemporary economic and social sciences.

The early church theologian Tertullian (155-220 A.D.) famously asked the question what Athens has to do with Jerusalem, and what the academy has to do with the church? Since the very beginning, the relationship between theology and other academic disciplines has been a difficult one. While social sciences display an “anthropological poverty” as they reduce human behaviour to particular central capacities (e.g. reason), theology has traditionally had little tools to answer questions of practical relevance in societies (“methodological poverty”).

Arttu’s dissertation is an attempt at resisting this divide with the help of the theological anthropology of Emil Brunner, and his Protestant brand of dialectical personalism with a strong relational grounding of human existence in God. Brunner is also particularly realist in terms of his social thought in general, and on the capacity for rational perception of human beings in particular, which he presents as a highly contingent capacity. Whilst human beings are able to know and discern the “world” around them, their self-knowledge is hampered by sin, which can be seen as a state of relational separation from their origin. As a result, both perception capacity and wisdom will vary depending on how close a matter is to the personal core (Personkern).

Insights from this encounter can be used inter alia to explain phenomena of strong technological progress vs. less impressive human progress. By way of example, it provides a theological explanation for the statement of the evolutionary biologist E.O. Wilson’s that “the real problem of humanity is the following: we have paleolithic emotions; medieval institutions; and god-like technology.” Social progress is a middle case: in a case study on economics, Arttu tracks the mixed blessings of economic progress. The positive track record of substantial social progress is real, but parts of it also risks being generated by mere quantity, at the cost of quality. A major reason for this lack of quality lies in a kind of anthropological disorientation emanating from the weak self-knowledge of human beings.

By providing pointers on how to bring back the human person in social disciplines, Arttu hopes to contribute to improving the understanding of the ethical dimension of social progress and human flourishing. The insights emerging from this work can be used to showcase to both theologians as well as to social scientists & economists that working together is not only possible, but also potentially fruitful.

Arttu Mäkipää is trained in both economics and theology. He has long experience in European public service, specializing in economic policy, peacebuilding and foreign affairs. Living in Kraainem, Belgium, he is married to Sara and they have three children.

The defense will take place online, on Tuesday 25 May at 10 AM.