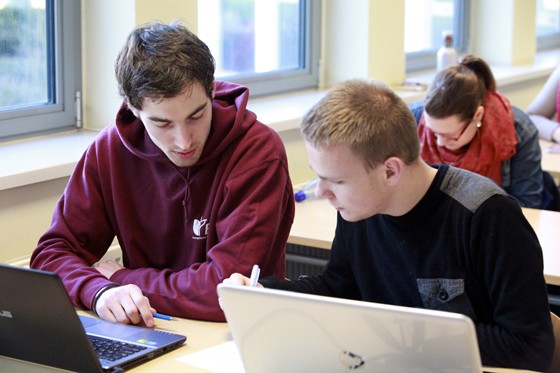 Over 200 students enrolled at ETF Leuven

LEUVEN, 22 September 2014 – Today the Evangelische Theologische Faculteit in Leuven (ETF) commenced the academic year of 2014-2015. With student numbers of more than two hundred, the stable growth is continuing this year too.

ETF has forty-one new registrations for the academic year of 2014-2015. Of these forty-one new students, twenty-two have enrolled for the Bachelor’s program, seventeen for the master’s program and two new students have been admitted for the PhD program. In total, the number of students well exceeds two hundred.

In his opening address, Rector Prof. Dr. Patrick Nullens referred to the great attention being paid in Belgium to the centenary of the beginning of World War I: “The historical roots of ETF lie in the missionary work of Ralph and Edith Norton among Belgian soldiers. In the midst of tragedy, suffering and violence, the good news of true liberation was proclaimed, of true peace that begins when a person opens their heart to Jesus. Today there is peace in Europe, but at the same time, there are many wars around the globe and religion does not play a minor role in this situation. Because faith touches the deepest essence of humanity, for good or for ill, theology is constantly relevant.”

Opening speech: ‘Theopoetics and the Kingdom of God: Embodiment, Humility & Hospitality’
In his opening lecture, Prof. Dr. Ronald T. Michener postulated that in these modern times, theo-logy often stresses logic and rationality at the expense of theo-poetics – the creating of flesh and blood. “Through our reading of the Scriptures and through our Church communities, God reveals Himself to our hearts and our souls as the Incarnate. As beings created in the image of God, we reveal His Kingdom to the world when we share in His ‘theopoetical’ characteristics, such as humility and hospitality. These characteristics must also give shape to theological practice.”