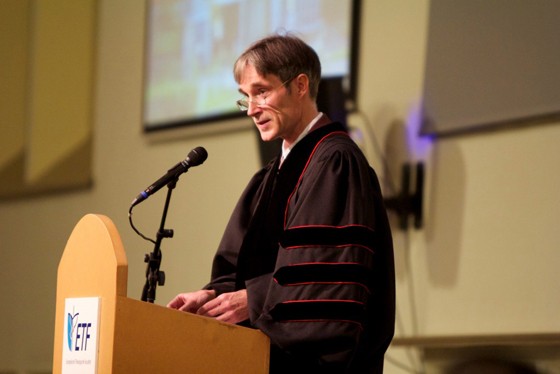 In his opening address, Rector Prof. Dr. Patrick Nullens spoke about growth as a policy goal of the ETF:. “The ETF wants to grow in breadth as well as depth. The two go together. Today Prof. Dr. Markus Zehnder will hold his inaugural lecture. His lecture emphasizes the value we as a faculty place on the Bible as the basis of all our theological endeavors. Not only Sola Scriptura but also Tota Scriptura. We emphasize the value of the canon as a whole. Prof. Dr. Zehnder demonstrates the fundamental values of thorough exegesis and the reading of the Scripture as a unit.”

Prof. Dr. Markus Zehnder, professor of Old Testament at the ETF, spoke in his oration about the arguments for the divine status of the ‘Son of Man’, as is mentioned in Daniel 7, and the implications of this for monotheistic thinking about the Hebrew Bible.

Inaugural address of Prof. Dr. Markus Zehnder: ‘Is the Hebrew Bible monotheistic?’
Prof. Dr Markus Zehnder give the opening lecture for this academic year, which was at the same time his inaugural lecture as professor at ETF. In his oration, he advocated that the ‘Son of Man’ in Daniel 7 is, already in the Hebrew Bible, described as a figure who is part of the divine kingdom. This assertion is not new, but the argument with which he supports this vision may be.

According to Zehnder, at least nine elements can be found in the description of the ‘Son of Man’ in Daniel 7 that refer to His divine status. For example, he mentioned among others the appearance of the ‘the clouds of heaven’ (verse 13), an expression which in the Hebrew Bible is only used for a divine being; the verb used for worship in this text (verse 14), always points to worship directed to a god in Biblical Aramaic; and the fact that there are more than one throne in the heavenly kingdom (verse 9), one of which is intended for the ‘Ancient of Days’, and it can logically be assumed that the other throne is intended for the ‘Son of Man’.

Zehnder concluded his argument: ”If it is true that the ‘Son of Man’ must already be understood in Daniel 7 to be a divine figure, we are forced to derive from this that the use of the ‘Son of Man’ in the New Testament points to an understanding of Jesus as more than an exemplary ideal human being, namely a divine figure, and that this understanding arises from a Jewish context and is not the product of a heathen, Hellenistic influence.”