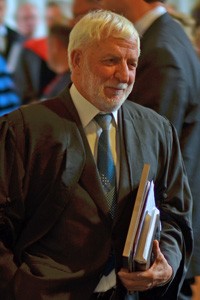 Marthinus Pretorius studied theology in Pretoria and Utrecht, majoring in Dogmatics. At the University of Utrecht, he mainly studied under the professorship of A.A. van Ruler and C. Graafland. He obtained his PhD in 1974 at the University of Pretoria, under C. Graafland (Utrecht) and F.J. van Zyl (Pretoria). His dissertation entitled “The Gospel of Suffering” was devoted to the Christology of the Danish existentialist Søren Kierkegaard.

Marthinus Pretorius served as an army officer-chaplain in the South-African army for almost twenty years. The harsh reality and severe need in the army shaped him as a pastor, while at the same time increasing his hunger for a deeper, academic reflection of the pastoral challenges. In 1981 and 1982 he was able to continue his studies at the University of Bern (Switzerland) by means of a research stipend, this time focusing on the areas of Practical Theology (under Prof. Dr Klaus Wegenast) and Pastoral Theology (under Prof. Dr Hans van der Geest).

As of April 1987, Pretorius was connected to the Evangelical Theological Faculty as a guest professor. He taught systematic as well as practical theology, with a special focus on pastoral theology.

In his classroom, his lectures and any academic interaction with him, the academic discipline of pastoral theology was never isolated from the pastoral practice. During and outside his classes, Pretorius was always first and foremost a pastor. He was able to guide many a student back on track. Even more than his classes, it will be his life lessons that will stay with those who knew him for a lifetime. 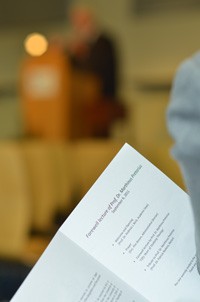 During his farewell address in September 2011 he reflected on his time as an army chaplain, which, in his own words, changed his life forever: “It has taught me one of the most valuable lessons in life, which is to try to relativize. For the first time, I stepped outside of my familiar world of church and friends in the faith, and met the total reality of the youth in my country. I constantly had to ask myself: ‘How do I represent Christ, and the Church of Christ, in this extreme situation?” Built into this reflection we find a very poignant definition of pastoral ministry: representing Christ, and His Church, in any given situation. This is what he invested himself in, and what he attempted to pass on to his students in his classes as well as in personal interaction with them.

As a teacher, Pretorius was expressly non-directive. Students almost never got his convictions handed to them on a platter, but were challenged to distill them form ironic side-remarks and riddles. Following in the footsteps of Socrates and Kierkegaard, he liked to be a thorn in the side of the established opinions. Ongoing criticism, irony and relativizing where his favorite tools of instruction. He saw it as his main duty to lead his listeners to a well-founded opinion, not necessarily his own.

Marthinus Pretorius has been supervisor for about a dozen Master’s theses. He acted as promotor for seven doctoral students, all within the field of Systematic Theology.

Professor Pretorius was a member of and contributed to the symposia of the following academic fellowships: Dogmatological association of South Africa (1969-), Practical Theological Association of South Africa (1975-), Reformed Theological Association (1979-), Church History Society of the Reformed Church (he contributed to the study days in 1967, 1968 and 1978), and Stiftung Kirche und Israel (1979-).

When you asked Pretorius which theologians have had a lasting impact on his life and thinking, and who have shaped him most, he would often name Søren Kierkegaard, Martin Buber, Oscar Cullmann, Arnold van Ruler and Frans Breukelman. A trait these great thinkers shared, and Pretorius particularly appreciated, was a willful creativity, which often contrasted the academic consensus. For example, he had a great appreciation for the colometric reading of the Scriptures (Breukelman), intended to keep the reader aware of the unconventionality of the Bible (Bucer), and consequently allowing himself and his theology to be corrected. 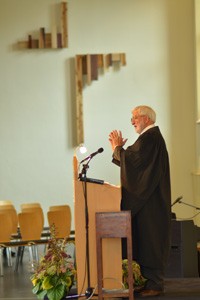 He wrote many articles, and was editor of the Festschrift The Secret of Faith, In Your Heart – In Your Mouth, in honor of Donald Moreland (Leuven: ETF, 1992).

Aside from being theologian and pastor, Marthinus Pretorius was a driven networker. He constantly connected people, loved the dynamics of interaction, lively conversation and festive comradery. This dynamic is probably one of the things his colleagues will miss and remember most. He was able to create a situation in which new and familiar faces were able to have a lively conversation from a multitude of disciplines and points of view, often while enjoying a fine glass of wine. He certainly brightened up academics, which can be somewhat bleak by nature.

As emeritus, Marthinus Pretorius stayed active as a preacher and pastor in Pretoria, South-Africa, until his sudden death on June 6, 2015.