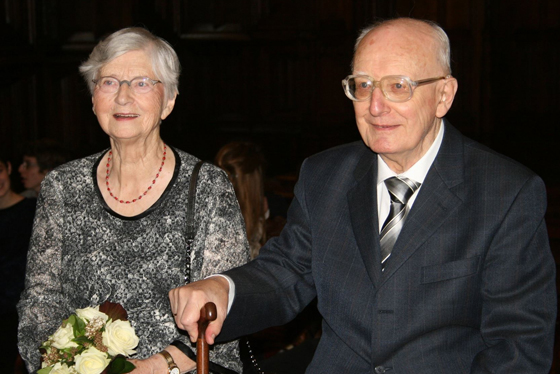 In grateful memory, Evangelische Theologische Faculteit (ETF) Leuven remembers Belgian theologian, teacher and director George Winston. On January 17, 2022, he passed away in an assisted living facility surrounded by his six children. He was unable to complete his ninety-sixth year of life. George and his wife Dora were hugely instrumental in the development of the Bible Institute Belgium, out of which ETF Leuven was born.

George Winston was born in Etterbeek (Brussels) on February 26, 1926, the son of American parents. Both parents worked at the Belgian Evangelical Mission (BEM, now Vianova). From 1936 to 1963, John Winston Sr., George’s father, was director of the BEM. During World War II, George left for the United States, where he studied history at Wheaton College, Illinois (1943-1948; B.A.) and theology at Dallas Theological Seminary, Texas (1948-1952; Th.M.). He then returned to Brussels, where he became a teacher at the Belgian Bible Institute, then affiliated with the BEM. He also engaged in the church planting work of the BEM.

In 1954, George married the Walloon Dora De Looper. She had studied in London and then worked for four years with the Salvation Army in Kinshasa. After they married, she too taught at the Bible Institute, including Old Testament and pastoral subjects. George and Dora Winston remained connected to the Bible Institute as teachers for over three decades, until 1995. In addition, George Winston was a guest professor at the Faculté Libre de Théologie Évangélique in Vaux-sur-Seine near Paris.

Under Winston’s leadership, in 1975 the Bible Institute moved to Heverlee (Leuven), where the training building of the French-speaking Jesuits was purchased. In Heverlee the interdenominational character was further strengthened. Winston strove to create an atmosphere of openness and respect for different points of view based on evangelical foundations. He also had vision for academic theological education. As early as 1974, he advocated the establishment of a European theological faculty in Heverlee, where an emphasis on academic theology would go hand in hand with attention to spiritual qualities and doctrinal stability. Winston co-founded ETF Leuven in 1981, which was recognized by the Belgian state as university education in 1983.

In 1985, after twenty years of leadership of the Bible Institute, Winston stepped down as director. From this time onward Mr. and Mrs. Winston committed themselves more deeply to evangelism and to founding and building new church congregations. Later they were actively involved in a new French-speaking Bible school in Brussels. They remained active well into old age: Dora Winston was still president of the non-profit organization Formasport until 2010. Together they advocated the possibility for women to preach and lead in church congregations. They collected their insights on this subject in the extensive and influential book Vrouwen in de gemeente van Christus, published in 1996 and in 2003 in English under the title Recovering Biblical Ministry by Women. In 2010, George Winston published a French-language study on the universal outreach of the church, L’Eglise avec un Grand E. In addition, during his career he wrote several booklets for a wide audience on a variety of theological topics, the latest in 2015 on Le mal et la souffrance.

In George Winston we have lost an exemplary and irenic leader, who together with his wife Dora had an immense influence on the development of the evangelical movement in Belgium and beyond. He himself was modest about his contribution to this. Until the COVID-19 crisis, he regularly attended academic ceremonies organized by ETF Leuven. On each occasion, he assured me that he and Dora continued to pray daily for the executive team, teachers and students of ETF. He had a warm personality and always showed personal interest in the welfare of the students. With gratitude, ETF Leuven established the “George and Dora Winston Fund” in 2008 to give Belgian students a helping hand.