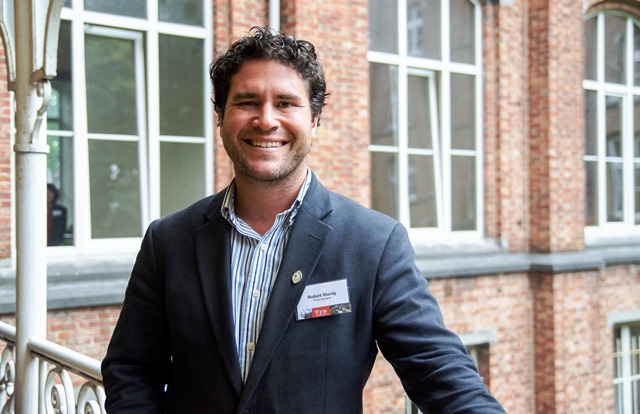 On September 8, Robert Sturdy, a junior researcher in the Institute of Post-Reformation Studies at the Evangelische Theologische Faculteit (ETF) in Leuven, will defend his dissertation examining the doctrine of divine providence of the early modern Scottish Reformed theologian Samuel Rutherford’s (1600-1661).

The English term “providence” comes to us from the famous sacrifice of Isaac, wherein God commands Abraham to offer Isaac, his only son, as a sacrifice. Abraham responds with “God himself will provide the sacrifical lamb for the burnt offering” (Gen 22:8). The term relies on a metaphor of divine vision. By combining the prefix pro, meaning “ahead” with the verb videre, meaning to see, one arrives at the term “foresee.” However, as the harrowing account in Genesis 22 shows, God does not merely foresee what will happen, but sovereignly guides it to a certain, unexpected end.

There is a fear associated with God’s sovereign guiding of events: that his providence is fatally imposed upon his creatures thus denying them of their fundamental freedom. With their strong doctrine of God’s sovereignty and the divine decrees, this was a fear associated with the Reformed in the early modern period. These associations persist to this day, but as this study shows, through a close examination of all three of Rutherford’s Latin works of scholastic theology and many of his English works, these fears are unfounded, at least in the case of Rutherford’s theology.

After an introduction to Rutherford’s life and works, this study dedicates a chapter each to Rutherford’s doctrine of God’s being, knowledge, will, and power before offering two chapters to divine providence, one of which is exclusively focused on providence and free will. The portrait that emerges is of an absolutely free and independent God, whose freedom and independence guarantees freedom for his creatures. Far from the hostile threat that God’s sovereignty fatally overwhelms freedom, Rutherford argued God’s freedom and human freedom meet in “friendly union,” where the two jointly will towards a common effect. This analysis of Rutherford’s understanding of God’s providence challenges the older scholarship on Rutherford as well as fatalistic associations with the Reformed tradition. It builds upon recent reassessments concerning Reformed Scholasticism, while also contributing to an ongoing, lively conversation concerning Reformed thought on freedom.

In addition to his work as a Junior Researcher in the Institute of Post-Reformation Studies, Robert Sturdy is Chaplain at St. Alban’s Chapel, The Citadel, in Charleston, SC.

The defense will take place online on Tuesday, 8 September, starting at 6:30 PM (CET).

Doctoral colloquium ‘Speaking of God in Times of Anxiety’

Sturdy’s PhD defense takes place during ETF’s doctoral colloquium ‘Speaking of God in Times of Anxiety’ from 7-11 September. The doctoral week will take place online for the first time.