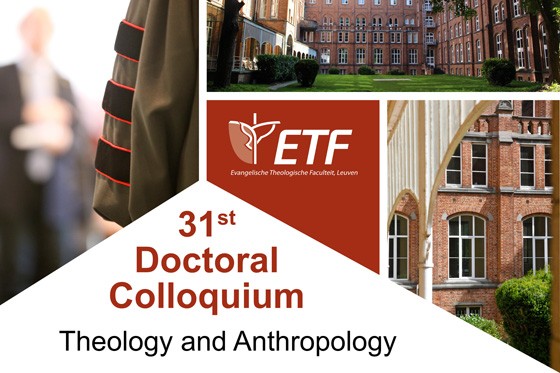 ETF’s annual doctoral week is an essential part of our PhD program. Students meet their fellow students and professors, prepare for exams and present their research. ETF professors and internationally recognized visiting scholars give public lectures and public defenses of dissertations take place.

Register your attendance via until August 26, 2016. Please indicate which sessions you plan to attend, what time you expect to arrive and depart and if you will join us for the meals before or after the sessions. The sessions are free of charge; however we do charge for the meals: € 10 for lunch and € 20 for dinner.

The Spectre of Nestorius: Christology and the Latin Discussions of Grace – Prof. Dr. Don Fairbairn

It is sometimes assumed that the Christological controversy and the Pelagian and (so-called) Semi-Pelagian controversies were distinct discussions, with relatively little overlap of ideas. However, these controversies took place at the same time and involved many of the same people. Moreover, most of the people involved in the so-called Semi-Pelagian controversy actually wrote refutations of Nestorianism. This paper—representing explorations that will develop hopefully into a book—will show how varying conceptions of what was wrong with Nestorianism led to varying understandings of grace and salvation in the Latin-speaking Church of the fifth century. (Back to program)

Paul’s use of the Old Testament within the New Testament has challenged lay people and scholars for years. One of the latest questions in this field of study concerns the starting point for considering the function of the Old Testament in Paul’s writing. Should one consider its use from Paul’s vantage point as one who was quite influenced by Scripture, or should one begin with the audience’s knowledge of Scripture?

First Corinthians is a particularly interesting letter to consider this question.  The Corinthian church is predominantly Greco-Roman in background. Corinthian Christians would have had much less understanding of the Old Testament than Paul as a result.

Paul did, however, spend eighteen months with them, and then wrote First Corinthians to them six years later. The letter contains eighteen agreed upon Scripture citations or echoes, comprising four percent of the book. These references come from the Law, the prophets, and the writings.

This paper will analyze how much Scripture the Corinthians actually knew, especially considering “do you not know” references within First Corinthians as well as ancient literacy, and draw some conclusions regarding the Corinthians’ knowledge of Scripture. It will then bring fruits of this study to the larger question of the starting point for Scriptural examination in Paul’s letters –  from the perspective of the readers or that of the writer.(Back to program)

What the will can(‘t) do. An Anthropological Exploration – Prof. Dr. Nico den Bok

Free will has a central place in theology. This does not necessarily mean, however, that the   will is a powerful faculty. What is it that the will can do, always, under all circumstances? Choose, yes; it is free. But it is not, by that fact, strong, or good, or independent. This lecture will explore some limitations in human willing with the help of some classical authors. Augustine, for instance, not only discovered the freedom of the will (against the Manichees), but also the weakness of the will (against    the Pelagians). One of the leading ideas will be that most, if not all, of what we call ‘will-power’ is dispositional, we have that power by nature (creation), by acquisition (training) or by ‘infusion’ (a special gift) and we have it for better or worse. For making choices only the will is required, but for making good dependable choices a set of good dispositions is required as well. A culture that values freedom above everything else becomes unreliable. Sustainability requires the formation of virtues – mental, psychological, religious virtues. (Back to program)

The so-called “Islamic State“ (ISIS) has been repeatedly in the news, not only because it was and still is fighting a cruel, merciless war against Non-Muslims and non-conforming Muslims alike, but also because of its destructions of cultural sites and classical antiquities. Should the damaging of the famous Arch of Triumph in Syria’s Palmyra be understood as a sheer demonstration of power of a pseudo-state trying to impress enemies and allies alike? Is it justified or even demanded by Islamic theology to aggressively attack cultural heritage? The presentation will specify earlier examples of the destruction of cultural sites in history and its justification by Wahhabi theology and shed some light on the ideological foundations of ISIS.  (Back to program)

The Ancient Cosmology of the Israelites – Prof. Dr. Mart-Jan Paul

Based on such views many illustrations are made.

It is possible to question these representations of the cosmology of the Israelites. The pictures are partly dependent on interpretation of Babylonian texts. I will offer alternative interpretations of Old Testament texts concerning:
1) the firmament and the storehouses of the heaven,
2) the relations between the sun, the moon and the stars, and
3) the waters under the earth. (Back to program)

The presentation focuses on some tensions within Reformed piety regarding philanthropy and misanthropy. Though Reformed piety is in its essence philanthropic  and apt to foster reconciliation and peaceful human relations, nevertheless the danger of derailment is always at hand. Misanthropic utterances in sermons and treatises by several representatives of the Reformed tradition  can account for a negative Wirkungsgeschichte. The paradox of being helpless and nevertheless fully responsible has been a source of depressive thoughts and even despair. It will be shown that a retrieval of genuine and sound Reformed piety will avoid these negative effects and will on the contrary further human dignity and solidarity. (Back to program)

Adam was not deceived, but the woman was deceived” (1 Tim 2:14). A New Testament Stereotype on Gender Differences in Exegetical, Historical and Social-Psychological Perspectives – Prof. Dr. Armin Baum

1 Timothy 2:14 has provoked severe critical objections. The statement is regarded as a serious misinterpretation of Genesis 3 (J. Roloff) and as a misogynistic text (A. Merz). Consequently quite a few Christian interpreters of the New Testament call its theological authority into question (M. Küchler). This critical rejection challenges us to reexamine the exact meaning as well as the plausibility of this disputed New Testament statement. I would like to look at ancient judgments on the influenceability of men and women, draw on modern insights on the influenceability of men and women, and interpret 1 Timothy 2:14 in the context of the Pastoral Epistles. I hope to be able to demonstrate that there is no reason to pigeonhole this New Testament statement as chauvinistic. (Back to program)

“We are (kind of) Protestants too!” How Free Church Evangelicals Relate Themselves to Other Protestants When Approaching Belgian Secular Authorities- Dr. Jelle Creemers

In strongly secularized Europe, Evangelical free churches have little credibility and are often labelled as sects. Since 1987 Evangelical churches in Belgium have strived to gain acceptance and influence in society by claiming full membership in the officially recognized Protestant religion. Their quest for recognition and consequential benefits has led them into difficult negotiations among themselves, with the state, and with other Protestants. The desired recognition became official in 2003. This lecture provides insight into the underlying processes of emancipation and socialization, highlighting the issue of compatibility between ‘free churches’ and ‘state support’. (Back to program)

The mission of the Institute of Leadership and Social Ethics is to contribute to public theology. We want to relate theological insights to contemporary challenges. During this presentation, we will present one of our current research projects, entitled “Driven by Hope: Hope in Theology and Economics.” This is a joint project, undertaken together with the Erasmus Happiness Economics Research Organisation, and completely funded by the Goldschmeding Foundation. The project starts from the recognition that hope is an important driving force both for human beings and for macro-economic developments. It can be a powerful motivation for transformation, innovation, economic growth and increased human well-being. With that in mind, the aim of the project is to stimulate the fostering of hope in human life and, especially, in economic life. In doing so, we bring theological, economic and psychological perspectives to bear on the analysis of hope. In this presentation, we will indicate possibilities for the integration of theology with economics regarding hope, presenting three different angles. First, in the tradition of Adam Smith, we consider hope from the perspective of the free market, describing hope as an entrepreneurial virtue (McCloskey). Second, we engage intensively with positive psychology, a relatively new field that is interested in personal happiness (Snyder). Third, we describe the significance of the virtue of hope for development economics, particularly for the capabilities approach (Sen & Nussbaum).(Back to program)

Many theologians are familiar with the famous adage fides quaerens intellectum, but its impact has diminished today as most current theological movements – whether liberal or orthodox – in fact do not embrace this ideal. Liberals oppose it straightforwardly. Barthians do not accept fides quaerens intellectum, because, according to them, what we believe cannot be proven and our Christian situation is rationally helpless. Other kinds of orthodox theologies follow the same track. Even Emil Brunner rejects the principle and only allows room for a few exceptions to fideism. Bultmann even argues that we can only believe what can be refuted rationally. So most orthodox and evangelical theologians do not subscribe to the program of fides quaerens intellectum, because – like Barthians – they embrace fideism.

I propose the view that ancient philosophy excludes the main line of medieval theology and philosophy. We have two quite different series of key concepts:

Models of pastoral leadership demonstrate shifts over the last decennia, from psychological and therapeutic models, to organizational models, to models of sense-making leadership and spiritual guidance most recently. This roughly parallels sociocultural shifts in Western societies. However, in a postmodern society, pastoral leadership not only faces the challenge of individualized spiritual guidance. An even greater challenge is that of community formation in an increasingly deinstitutionalized network culture where transparency and security have become primary values. Therefore, identity formation is an indispensable element for future models of pastoral leadership, at collective and personal levels, and in interaction with public concerns and relevance. Indeed, pastoral leadership has significant parallels with newer models of identity leadership and public leadership. This paper explores some of these parallels in a late modern, Western sociocultural context, and will present a multi-dimensional model of religious leadership that has been developed to meet these challenges. This model will be presented along with a research agenda to further develop and validate it. (Back to program)