Home News & Events Events Film as parable: the Value of Film for Theology, Church and Education 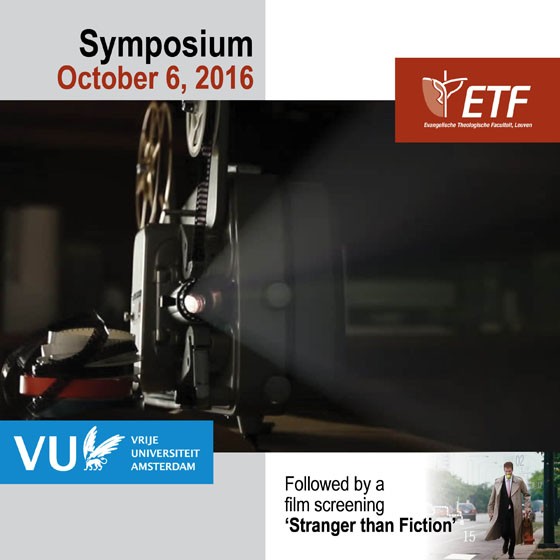 Film as parable: the Value of Film for Theology, Church and Education

This symposium is cancelled.

Following the promotion of Rinke van Hell (June 2016), the Department of Practical Theology of the ETF Leuven and the Amsterdam Center for the Study of Lived Religion of the VU University Amsterdam are happy to invite you to a symposium.

In her empirical research, Van Hell explores the function of film-as-parable for orthodox Protestant film viewers. She concludes that film can form a powerful instrument for religious identity construction of Christian viewers. During the symposium the implications of film-as-parable for practical theology, religious education and churches in a plural society will be explored from various angles.

In the evening the film “Stranger than Fiction” will be introduced, screened and discussed. Introduction and discussion will be in Dutch, English translation will be available.
You can attend both symposium and film screening or choose one of both activities.

Register now online for this symposium and/or film screening until September 29th, 2016.

Dr. Jack Barentsen is Associate Professor and Department Chair of Practical Theology at ETF Leuven and senior researcher at the Institute for Leadership and Social Ethics. His main areas of interest are church and religious leadership, social identity and spiritual formation.

Dr. Rinke van Hell is lecturer and researcher at the Department of Theology at Ede Christian University of Applied Sciences and freelance film critic. In June 2016 she successfully defended her PhD research on film and practical theology at ETF Leuven and VU University Amsterdam.

Dr. Johan Roeland is lecturer in Media, Religion and Culture at VU University Amsterdam. One of his main research interests is the relation between (social) media, popular culture and religion and conservative Christianity.

Dr. René Erwich is Associate Professor of Practical Theology at ETF Leuven and Associate Professor Faith in Context at Ede Christian University of Applied Sciences. His main expertise is pastoral theology and the various contexts of faith practices in churches and religious education.

Prof. Dr. Sylvain De Bleeckere is Emeritus Professor at Hasselt University (department of Architecture and Art). His expertise is in philosophy, theology and cultural studies. He will address Stranger than Fiction as parable and explore the relation between Word and Image in this film.

For many Christians watching films and religious identity are no longer two separate entities, but although watching films is growing in popularity among Christian film viewers, little research had been done towards the functions of narrative films for religious identity construction. The empirical research that forms the basis for this presentation aimed to clarify the role that film plays in the religious identity of Christian film viewers. How do faith and film viewing relate to each other? The results indicated that film performs the function of film-as-parable and that it can help the viewer to reflect on the topic of the film or even make an appeal to change their views or way of life. Film thus becomes a source for theological reflection, a locus theologicus. This gives film an important function in the lives and religious identities of film viewers. This place for film in the daily lives and religious identity construction of film viewers must be accounted for in theology and the church and may form an important tool in religious education in the 21st century. Therefore, the implications of the research project and its results are explored for practitioners in the orthodox Protestant churches, religious education teachers and practical theologians.

Gagaism and its paradoxes: Towards a critical practical theology of popular culture – Dr. Johan Roeland

This paper explores structural parallels between the processes of making and watching films on the one hand and telling and listening to life stories on the other hand. In both cases there is a complex background prefiguration structure of vested interests, normative framework, and personal intentions; an equally complex configuration within the story using structures, perspectives, characters, and stylistic elements to construct the storyscape; and again a complex refiguration in the relation with the audience. The paper claims that awareness of these parallels and processes can help to better understand the construction and reconstruction of meanings and the ways in which worlds are being made, unmade and remade.

Vikings: a practical-theological account of the clash of religions and its meaning in theological training – Dr. René Erwich

The popular TV-series Vikings celebrated its 4th season this year and shows a multi-layered account of a thoroughly framed clash of religions. Looking superficially, one witnesses a christian monk becoming a pagan worshipper and a violent northman being converted to Christianity. What is the deeper configuration behind this swap of religions? In this contribution I will focus on the well-developed narrative of balancing religions into a christian-pagan synthesis and the meaning this might have for theological education today. In order to achieve this I will use Ricoeur’s hermeneutical theory and integrate accessible historical data.