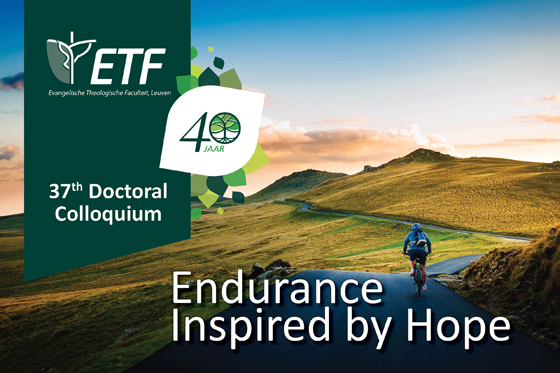 ETF Leuven’s annual Doctoral Colloquium is an essential part of our PhD program. Students working on a dissertation gather during this week and meet with their professors, prepare for exams and present their research. Public defenses of dissertations also usually take place during this week.

Hope as an Ecological Political Virtue – Dr. Steven van den Heuvel (ST)
Hope is an important motivating force in environmental ethics; there is a broad recognition that we need a hope-infused strategy to cope with the various ecological crises, and in particular with the climate crisis. Yet environmental ethicists differ on how exactly such a hope-infused strategy should look like. In this lecture, I will provide an overview of the various proposed hope-strategies, in political ecology. In doing so, I will use the four dimensions of hope identified by hope-scholar Anthony Scioli, who discerns 1) survival hope, 2) mastery hope, 3) attachment hope, and 4) meaning hope. I will argue that this taxonomy is a fitting one to describe the various hope-strategies in political ecology. Furthermore, I will highlight strong and weak points of each of these four strategies. In presenting this matrix of hope-strategies in political ecology, I will give particular attention to the way that Christian ecologists have contributed to each of these strategies. In taking stock of the results, I will stress that we need an explicit and integrated hope-approach to political ecology, in which all four dimensions are given their due, while retaining the critical tension between them.

The Authority and Practice of Church Leadership as Grounded in Particular Frameworks of Hope and Salvation – Prof. Dr. Jack Barentsen (PT)
This paper explores the relationship between the authority and practices of church leadership, and how these are grounded in explicit and implicit images of hope and salvation in various leadership proposals. Literature research explores various historical and systematic structures and practices of church leadership in conjunction with their avowed or implicit images of hope and salvation. This admittedly somewhat eclectic review of church leadership proposals demonstrates the contextual sensitivity of both church leadership practices and images of salvation and the good life. Also, structures of leadership develop in close interaction with images of salvation. This study is relevant for our present time when traditional institutional and leadership structures in churches are being seriously questioned and adapted, which also connects with debates about how visions of salvation and the good life shift. Hence, this study contributes to a fuller understanding of how particular dynamics of leadership and followership are constructed theologically for and within churches who long for but also struggle with their missional challenge.

The Scholarly Debate on the Authenticity of the Pauline Letters: Practical Reflections on the Basic Methodological Rules – Prof. Dr. Armin Baum (NT)
In my lecture I would like to discuss the critical method by which one can distinguish between authentic and inauthentic texts of antient literature and of the New Testament. I believe that the historical critique of the New Testament letters is still too strongly influenced by Martin Luther’s preference for the Letters to the Galatians and to the Romans as well as by F. C. Baur’s preference for an anti-Jewish Paul, who could only have written the four so-called main letters (Hauptbriefe). Whoever investigates the literary authenticity of the New Testament Pauline letters should respect a basic methodological rule: All thirteen letters must be analyzed according to the same criteria. In other words: The same standards must be applied to all thirteen letters. This rule is also relevant for the critical examination of the synoptic parallels between the Pauline letters. Not infrequently, scholarly research has focused exclusively on the parallels between the disputed Paulines, leaving out of consideration the parallels between the undisputed Pauline letters. While it is generally known that Galatians and Romans are closely related and have many synoptic parallels, in important studies on the parallels between 1 and 2 Thessalonians and between Colossians and Ephesians they have hardly or not at all been considered. Because of this methodological shortcoming, conclusions have been drawn from the parallels between 1 and 2 Thessalonians or between Colossians and Ephesians that would not have been possible if the researchers had looked at the parallels between all Pauline letters. For methodological reasons the arguments from the synoptic parallels between the disputed Pauline letters which have been developed and applied by William Wrede, Leslie Mitton, E. P. Sanders and many others must be abandoned. They simply are not reliable critical instruments.

Clear and Distinct Knowledge of God? Salomon van Til (1643–1713) and the Refoundation of Natural Theology on Cartesian Principles in the Seventeenth Century – Dr. Matthias Mangold (HT)
Based on research conducted for my PhD dissertation (defended at ETF Leuven in December 2021) this presentation discusses some intriguing developments regarding the basis, content, and scope of natural theology which occurred in the Netherlands of the seventeenth century. As the philosophical ideas of René Descartes began to impact Dutch thinkers, various controversies emerged between the adherents of a more traditional scholastic approach and the proponents of the “new science” based in Cartesian principles. These controversies form the context for the development of a new approach to natural theology. In the 1650s prominent Reformed theologians began to propound Cartesian notions regarding the natural knowledge of God. They adopted novel proofs for God’s existence, provided alternative accounts of God’s essence and attributes, and gave deviating explanations of creation and divine providence. It was not, however, until the end of the seventeenth and the beginning of the eighteenth century that these elements of a distinctively Cartesian natural theology became integrated into substantial, systematic accounts. One prominent example of such a system is the Compendium on Natural Theology published in 1704 by the Leiden professor Salomon van Til. Yet, as this presentation will show, Van Til’s Compendium was much more than a mere composition of familiar Cartesian themes. More significantly, Van Til re-appropriated the work of his predecessors with a strong apologetic bent, aiming to defend traditional Christian notions against the radical conceptions of early Enlightenment thinkers like Baruch Spinoza and Thomas Hobbes.

Splitting Heirs: When the Land was Divided (Gen 10:25) – Dr. W. Creighton Marlowe (OT)
Genesis 10:25 reads, “Two sons were born to Eber: One was named Peleg, because in his time the earth was divided; his brother was named Joktan.” What this “division” (palag) was has baffled commentators ever since. A few explanations have become popular but none has reached consensus. A fresh and focused look at this genealogy may result in a new and satisfying interpretation. Whatever this division was most likely is limited to Eber’s family and immediate circumstances. Peleg, likely the firstborn, was named after some kind of division (palag). His brother’s name (Joktan; yoqtān) is not explained in the passage, but if the root is qatan then the meaning would be something like “he is insignificant.” Some Hebrew lexica appeal to the Arabic cognate meaning “watchful.” According to the Hebrew Bible in Genesis 11:18, Peleg lived to be 239; but the Greek OT (Septuagint) says 339. His brother is not mentioned in the extra genealogy of Shem in Genesis 11 because it was Peleg’s lineage that led to Abram (vv. 18–26). What contextually best explains the division for which Peleg was named? A plausible answer is a theological split between these brothers, since Joktan and his lineage are connected to Canaanite settlements (Gen. 10:30).