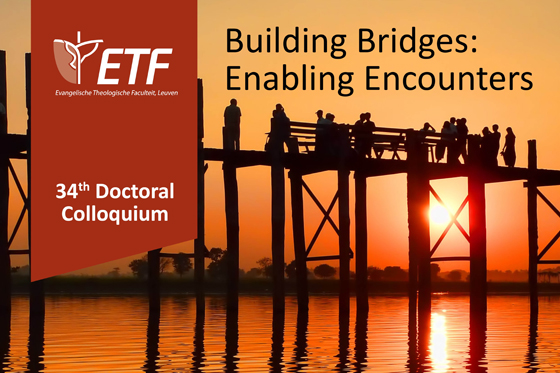 ETF’s annual doctoral week is an essential part of our PhD program. Students meet their fellow students and professors, prepare for exams and present their research. ETF professors and internationally recognized visiting scholars give public lectures and public defenses of dissertations take place.

Register your attendance via until August 26, 2019. Please indicate which sessions you plan to attend. There is the possibility to join us for the meals before or after the sessions. The sessions are free of charge; however we do charge for the meals: €14 for lunch (at 1:00 PM) and €31,5 for dinner (at 6:30 PM). Please register for meals via no later than August 21, 2019.

Like most Western nations, Germany has experienced a history of secularization, resulting in church decline. However, some Christian communities have been less affected by this decline. The historical free churches (Freikirchen), usually of an evangelical nature, have not only developed a more explicit missionary identity than mainline churches; some of them have also been able to experience church growth against the larger trend. In this short lecture quantitative and qualitative data are presented based on a study of the Bund Freier Evangelischer Gemeinden (BFeG) in Germany. These data show correlation between general church growth and conversion growth, that young churches grow better (in both respects) than older churches, that the net conversion growth (conversions minus apostates) of younger and older churches is overall largely the same, and that growth results in Berlin outperform results in other cities and in the BFeG as a whole. If time allows, these results may be discussed with a view to existing studies of (free church) mission in the West.

Justification by Faith in the Dawn of the Synod of Dordt: Franciscus Gomarus on the Crucial Issue with Jacob Arminius – Dr. Dolf te Velde (HT)

The Reformation of the 16th century viewed justification by faith alone as the crucial doctrine. How does this judgment function in debates concerning predestination, grace and free will prior to the Synod of Dordt? Franciscus Gomarus has pointed out on several occasions that Jacob Arminius held deviant views of the doctrine of justification. Compared to the content of Reformed confessions, Arminius’ view shows a number of important conceptual changes: (1) Faith is seen as the act itself that makes us righteous before God, not as the instrument by which we embrace the righteousness of Christ. (2) God accepts the imperfect act of faith by a ‘gracious estimation. (3) The sacrificial death of Christ is not the ground of our justification, but the ‘meritorious cause’  by which God changes the ‘throne of justice’  for the ‘throne of mercy’. (4) The concepts of ‘satisfaction’ and ‘imputation’ are mutually exclusive. In this explanation of justification by Arminius, parallels with the Socinian way of thinking can be detected. For Gomarus and other Reformed theologians, this implicit Socinianism was the most dangerous ingredient of Arminius’s teaching.  The Canons of Dordt address the topic of justification by faith alone on a few occasions. Ongoing teaching on election, grace and faith, however, makes it clear that faith is not seen as a human act, but as a divine gift and as a fruit of election.

‘Unity in diversity’ is a common theological statement but in empirical research difficult to grasp. Tension may exist between the faith perspective based on biblical teachings and the reality that the practice of ‘unity in diversity’ needs to be contextualised in different social-cultural settings. In empirical studies this is often seen as a friction because it is also related to human aspects like dominancy and superiority which easily translate into a theological dispute. Several narratives in the Bible tell the story of this practice of inequalities. These uneven confrontations can also be analysed using a cultural anthropological research methodology (the CRVS model) that can suggest new perspectives on how different cultural values can make peace with religious values and can become  building stones in the sometimes difficult dialogue between migrant churches and primordial churches. In the presentation we will use some biblical narratives to illustrate these analyses.

Usually one assumes that the Israelites had a negative view of the afterlife in the Old Testament, with some exceptions in its later texts. In this presentation I will describe some recent changes to this perception. Important questions are: What does the word sheol mean and is it the destination of believers? How can we interpret the many gifts for the deceased found in burial places in Israel? Related to the view on life after death is the view on the nature of man. What are the meanings of nefesh (soul) and ruach (spirit)? How do we have to view God’s judgment: only in this life or also after death? This lecture gives an overview of recent approaches, without going into detailed exegesis. I hope to stimulate further research on this subject, also related to the study of the New Testament, Systematic Theology and Judaism.

The Historical-Critical Method in Biblical Studies: its History, its Potential and its Limitations – Prof. Dr. Armin Baum (NT)

The expression “historical-critical method” is ambiguous. As its use shows, it identifies not just one, but at least two different methods that deal with different questions and comprise different steps. The word “criticism” or “critical” is particularly ambiguous and has very different meanings depending on the context. I will start with an overview of the usual scholarly terminology. Following that, I will address the exegetical method. For what kind of questions was it developed? What is its potential? What methodological steps does it consist of? What are its limitations? Moreover, what significance does the Holy Spirit have for the exegetical work of the Christian exegete? Next, I will describe the historical method. What kind of questions does it help to answer? What can it achieve? What are its limitations? In addition, what can the Christian historian expect from the Holy Spirit? Finally, I will deal with a historical criterion that has been particularly controversial in discussion of the historical-critical method to this day: a priori criticism of the miraculous. How is this kind of criticism justified by its defendants? What objections do its opponents raise? The fact that the term “historical-critical method” has different meanings is often overlooked by Christians outside the scientific community, and even in scholarly discussions, it is not always taken into account. In any case, the question of whether someone advocates “the” historical-critical method cannot be answered by a simple yes or no.

Four hundred years ago the Synod of Dordrecht (1618-19) formulated a text that became a confessional document of Protestant Churches in the Netherlands. Studying these Canons means building a bridge not only between the present day Reformed church and one of the defining moments in its history, but also between two groups of Protestants: the orthodox Reformed (who now represent the minority view) and the Remonstrants (whose views were rejected at Dordt and never officially rehabilitated). Seen from their content, the Canons of Dordrecht seem very much concerned the opposite of building bridges. They focus on the topic of divine election, which is in itself divides people, and in more than one way, in the end even irrevocably. The dividing line is drawn by God himself: some people are elected, others are not. This division, however, seems to occur on two different levels, for people are elected for eternal life or elected in history. God has chosen some persons for eternal salvation while denying that to others; but God has also chosen Jacob and not Esau, Israel and not the other peoples of the world. The Canons focus on the first kind of election, while many biblical narratives, especially in the Old Testament, focus on the second. After distinguishing these two kinds of election, this lecture will explore their internal relation. Seen from the predestination of God, does a vital connection exist between the eternal destiny of people and their historical destiny? Is there a bridge between time and eternity, and between people, and how does election relate to both?

In an era of global migration, followers of minority immigrant religions (such as African Pentecostalism in Flanders) who have settled in the West are not only seeking integration within host countries, they have also adopted daily life activities that create social fields and links which oscillate across national boundaries. In this way, processes in both sending and receiving countries affect the construction of religious identity with which migrants engage ruptures mediated by migration and living away from home. Upon arriving at destination countries, African immigrants either join established African migrant churches or found their own particular congregations which bear the spiritual signature of the churches they belonged to in Africa prior to taking the journey. In those minority immigrant church congregations, migrants are not just expected to participate in corporate worship, Bible study, prayer and fellowship which stabilize faith in a secular context, but there they expect to receive help (Ubuntu, or African hospitality) as they seek integration into their new and sometimes hostile host communities. This paper contributes to this issue by focussing attention on transnational Ubuntu in three ways. First, by apprehending African Pentecostalism’s biblical intuitions, the paper articulates how African Pentecostals utilize biblical passages in the construction of hospitality narratives and interventions among congregants in Flanders. Second, the paper notes three leading African voices whose analyses of Ubuntu have been employed to inspire specific hospitality interventions of Africans both in Africa and among the scattered African Diaspora. Third, the paper highlights the particular experiences of Word Communication Ministries, an African immigrant Pentecostal church based in Brussels and Antwerp, in order to account for the incorporation of African culture and Pentecostal theologies in the specific hospitality interventions within and among the African Diaspora in Catholic Flanders.

YHWH’s Ruach as a Chiastic Center in Isaiah 44:2b–5 – Dr. Creighton Marlowe (OT)

רוח in the Hebrew Bible needs closer analysis and more nuanced translations and interpretations in contrast to traditional approaches colored by theological presuppositions that trump contextual exegesis. By saying this, one does not reject the Trinity and the Holy Spirit as appropriate Christian beliefs, but theological conclusions must be deduced from texts that actually support them exegetically. Upper-case “Spirit” in English versions may be misleading at best and inaccurate at worst, at least in some cases, if not all. This paper will demonstrate that “Spirit” in versions like the NIV in Isaiah 44:3b is more eisegetical or theological than exegetical. רוח as God’s or YHWH’s appears in the MT as a construct genitive, with has several different possible contextual meanings. The ruach elohim of Genesis 1:2b is arguably contextually, “a wind sent by God,” for example. The phrase “spirit of holiness” occurs only three times in the OT in two passages (Psalm 51 and Isaiah 63). In each instance the rendering “Holy Spirit” is anachronistic, a post-OT concept, and the contexts support more the notion of a “passion for holiness.” Something similar appears also to be the case with Isaiah 44:3b, where “my ruach” is parallel to “my ‘blessing’,” and which is metaphorically described as the pouring out of water on that which is dried up, producing spiritual/ethical renewal and growth.