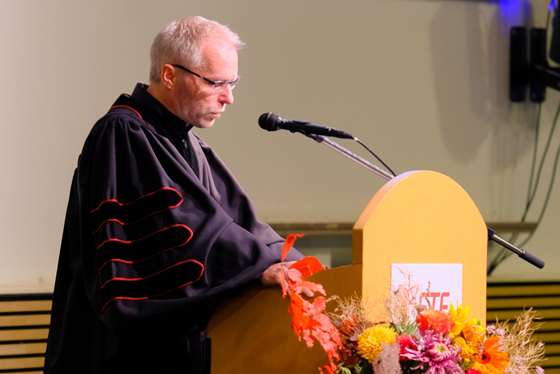 Another slight growth in number of new residential students in Bachelor program.

The Evangelische Theologische Faculteit in Leuven opened the 2022-2023 academic year with 61 new students today. Prof. Dr. Jelle Creemers delivered his inaugural lecture as professor of Religious Studies and Missiology. He succeeds Prof. Dr. Andreas Beck as Academic Dean of ETF Leuven as of this academic year.

The student total for 2022-2023 is estimated to reach 225. Another slight growth in the number of new residential Bachelor students is notable.

Theology as a vocation
In his opening word, Rector Prof. Dr. Jos de Kock made a case for academic theology as a vocation. “At a time in which the question of the current and future relevance of theology is constantly being posed, it is important to sufficiently reflect on the past. In doing so you see how much fruit theological teaching and research has already brought forth. This may serve as an encouragement to boldly continue contributing to academia, the church and society. At ETF Leuven, we know we are constantly called to equip students to share the good news of Jesus Christ in a variety of places and ways.”

The Flemish evangelical free church movement
In his inaugural address, Prof Jelle Creemers highlighted the history of the evangelical free-church movement in Flanders over the past forty years. Professor Creemers discussed evangelical spirituality and the close-knit informal networks that characterize the evangelical movement. In particular, he reflected on the relationship with two so-called ‘historical opponents’ of the movement: firstly, the socio-political context and, secondly, the perceived ‘liberalism’ within the churches of the United Protestant Church in Belgium (UPCB). However, Professor Creemers sees an important development in this: “Opposition to the UPCB has increasingly given way to cooperation, power sharing, shared identities and shared aims. This requires a better understanding of the other, who has also become a partner. I advocate an open space to actively seek what binds together. We already see this happening here and there and it seems to me to be of great importance for the future of the small Protestant-Evangelical minority in this country. And in this, ETF Leuven as an interdenominational institution can also play an important role.”

Change of Deanship
With the start of the 2022-2023 academic year, Professor Creemers will also start as the new Academic Dean of ETF Leuven. Professor Beck will pass the baton to him after an impressive 19 years. During the Doctoral Colloquium earlier in September, Professor Beck’s long track record as Academic Dean of ETF Leuven was extensively reflected upon. For nineteen years, he put his heart and soul into the academic development of ETF Leuven. Rector De Kock: “He is an example to many of hard work, with vision and perseverance, with hope in heart and full of inspiration. ETF Leuven as we know it today would not be here without the commitment and leadership of colleague Beck.” Professor Beck will remain at ETF Leuven as full professor and department Chair of Historical Theology and director of the Institute of Post-Reformation Studies (IPRS).

About Prof. Dr. Jelle Creemers
Jelle Creemers (1978) is professor in and chair of the Department of Religious Studies and Missiology and the present Academic Dean of ETF Leuven. Between 1996 and 2005, he studied theology and religious studies (lic.) at ETF Leuven and philosophy (kan.) at the Higher Institute of Philosophy (KU Leuven). He taught Protestant-Evangelical religious education for over ten years. In 2006, he joined ETF Leuven as a part-time research assistant, where he obtained his PhD in 2014 with a dissertation on the international dialogue between the Roman Catholic Church and Classical Pentecostalism. Furthermore, he was appointed at ETF Leuven as assistant professor (2014), associate professor (2017) and full professor (2022). Jelle Creemers is currently director of the Institute for the Study of Freedom of Religion or Belief (ISFORB) at ETF Leuven. He is also Research Associate at the Interculturalism, Migration and Minorities Research Centre (KU Leuven). 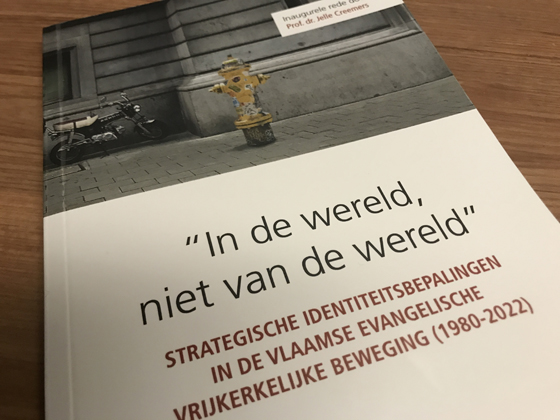