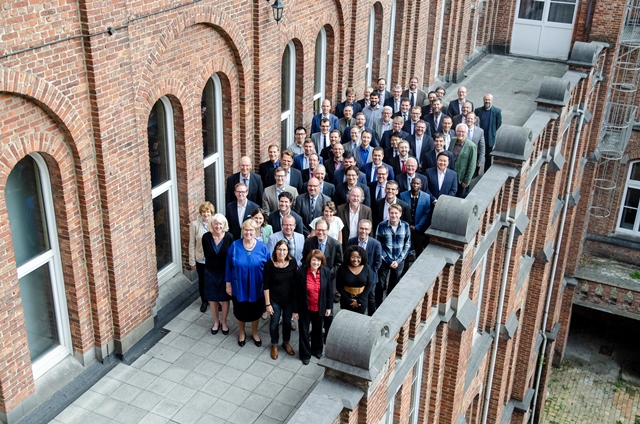 The annual doctoral colloquium of the Evangelische Theologische Faculteit, Leuven features three promotions – one the word “Rabbi” in the Gospel of John, one on the Pauline speeches in Acts, and one on locals as stakeholders in mission ministries – and many academic lectures, amongst which the farewell lecture of Prof. Dr. Antonie Vos.

Locals as stakeholders in mission ministry
On September 3, Pamela LaBreche (USA) will defend her thesis, ‘Locals as Stakeholders: An Investigation of the Contribution of Romanian Evangelicals to North American Missionary Ministry Evaluation.’ In her dissertation LaBreche recommends greater intentionality on the part of missionaries to solicit feedback from local people, more proactivity on the part of Romanians to offer feedback, and stronger linking of formal and informal ministry evaluation processes. Further developing a relational way of doing evaluation may enhance missionary effectiveness in partnership with Romanian churches. LaBreche’s promoter is Prof. Dr. Klaus Müller. Co-promoter is Prof. Dr. Anne-Marie Kool (ETS, Croatia).

Pamela LaBreche served as a missionary in Romania from 1996 to 2018, most of that time on the staff of the Areopagus Center for Christian Education and Contemporary Culture in Timisoara. She now resides in North Carolina, where she and her husband are involved in training new missionaries at the Center for Intercultural Training.

Pauline Speeches in Acts
On September 4, Daniel Gleich (CH) will defend his thesis: ‘Die lukanischen Paulusreden: Ein sprachlicher und inhaltlicher Vergleich zwischen dem paulinischen Redestoff in Apg 9-28 und dem Corpus Paulinum.’ Gleich presents a comprehensive study of similarities and differences between the speeches of Paul in Acts and comparable statements in the Pauline letters, arguing that a skeptical view of their authenticity cannot be based solely on differences between these texts and the undisputed letters of Paul. Appealing to conventions of ancient historiography that assessed authenticity of a speech not from its vocabulary but from its content, Gleich searched for parallels on a propositional level and assessed their degree of correspondence. He found especially in the undisputed letters of Paul many significant parallels to autobiographical and theological statements of the speeches attributed to Paul in Acts. While similar statements in both corpora also manifest very different perspectives, these are nevertheless not irreconcilably different. Gleich’s promoter is Prof. Dr. Armin D. Baum.

Daniel Gleich is Lecturer in New Testament at Theologisches Seminar St. Chrischona (tsc) in Basel, Switzerland. He is married to Katharine and they have three children.

“Rabbi” in the Gospel of John
On September 5, Yevgeny Ustinovich (UA) will defend his thesis: ‘“Rabbi” in the Gospel of John: A Sociolinguistic Approach to Speech Accommodation on the Intratextual and Extratextual Levels’. In the Gospel of John, the Semitic word “rabbi” occurs more often than in any other book of the New Testament. How was Jesus similar to rabbis – other Jewish teachers living at the end of the first century when the Gospel was written – and how did he differ? In his dissertation, Yevgeny Ustinovich argues that the author of the Gospel addressed an audience including non-messianic Jews. Such readers would likely respond more positively to a presentation of Jesus in terms related to their previous religious experience. In a context of great uncertainty in Judaism marked by suffering and confusion following the destruction of the Temple, and its replacement by those claiming the authority of the Torah, Jesus the Rabbi in the Gospel offers better answers. He points to the new Temple of his risen body, gives a new understanding of the law, and proclaims the fulfillment of Old Testament promises. Ustinovich shows that this enables the Evangelist to lead his readers better to understand how Jesus the Rabbi could be seen as Jesus their risen Lord. Ustinovich’s promoter is Prof. Dr. Jacobus (Kobus) Kok.

Yevgeny Ustinovich works as a part-time teacher in Evangelical Reformed Seminary of Ukraine and translator of theological literature. He has also served as literary editor of Slavic Bible Commentary.

Farewell to Three Professors
On September 3, Prof. Dr. Herbert H. Klement (DE) will deliver his farewell address: ‘GOD in the Old Testament and Christian Faith.’ Appointed in 1997, Klement has served ETF Leuven as Professor of Old Testament for more than 22 years, besides his position at the Staatsunabhängige Theologische Hochschule in Basel. He played an important part in German evangelical biblical studies and earned his PhD at Coventry University in 1995 on the books of Samuel. He wrote extensively on these and ancient Israel’s history, and also on the book of Jeremiah, anthropology of the Old Testament, mission, and the witness of Christ in the Old Testament. Thanks to his contacts in Germany, Switzerland, the UK, Denmark, the Netherlands, and Belgium, Professor Klement has contributed significantly to establishing a network of evangelical scholars striving for a higher level education and research in Old Testament studies.

With his address ‘Mission and Truth. Information without Fearing Reduction of Support’, Guest Professor of Religious Studies & Missiology  Prof. Dr. Klaus Müller (DE), will bid farewell to ETF on September 5. Müller has a long-time involvement in Mission.  In 1973 he began his mission work in Puluwat, Micronesia, and maintains a connection with this field work. His academic studies at Fuller Theological Seminar and his PhD at Aberdeen University with Andrew Walls were building stones for his teaching work in several institutions in Germany, including  Korntal and FTH Giessen in the field of Worldwide Mission. Since 1999 he has been Guest Professor at ETF Leuven where he supervised several PhD students and published his impressive work Das Gewissen in Religion und Kultur.

Lastly, also Prof. Dr. Antonie Vos (NL) will give his farewell address ‘The Impact of Modern Christian Theology and Philosophy’ on September 7. Vos studied theology and philosophy in Utrecht and Oxford. In 1981, he earned his PhD at Utrecht University on the intersection of philosophy and theology. After his career at Utrecht University and the Protestant Theological University in the Netherlands, Vos was appointed as part-time Professor of Historical Theology at ETF Leuven in 2008. During his years at ETF, he published dozens of articles and several books on late medieval and early modern thought, including two groundbreaking monographs on the influential theologian John Duns Scotus. Rector Prof. Dr. Andreas Beck: “We look back with much gratitude on the work of Professor Vos during the last eleven years. His lectures on the history of Christian theology and of Western philosophy have been particularly appreciated by our students. Moreover, he greatly helped to establish the Institute of Post-Reformation Studies (IPRS) at ETF. Not only an outstanding scholar with a brilliant mind, he also has been an inspiring supervisor for his PhD students and an encouraging colleague and friend for many at ETF.”