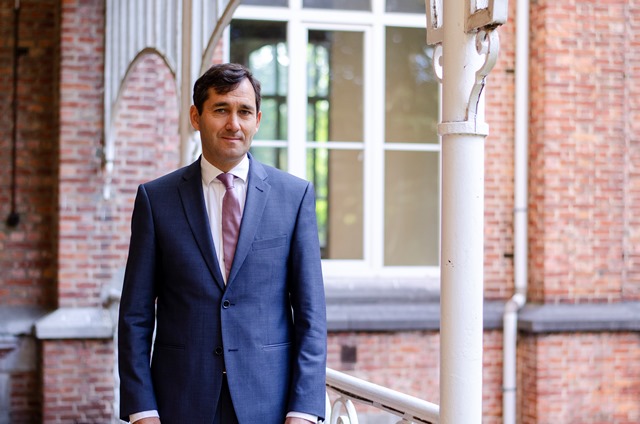 Evangelische Theologische Faculteit (ETF) in Leuven has appointed Dr. Aza Goudriaan as part-time guest professor with effect from 1 September. With this appointment, ETF Leuven strengthens its Department of Historical Theology and Institute of Post-Reformation Studies (IPRS).

Prof. Dr. Aza Goudriaan was recently appointed part-time guest professor of Historical Theology at ETF Leuven in addition to his main affiliation at VU University Amsterdam. The appointment of Goudriaan will in particular perpetuate ongoing development of research in the Institute of Post-Reformation Studies established at ETF, just as Prof. Dr. Antonie Vos has finished his work at ETF in September 2019 in connection with retirement.

Goudriaan has been working at VU University since 2007, currently as senior lecturer in the history of Christianity. He studied theology in Leiden and at the Ludwig-Maximilians-Universität München. In 1999 he obtained his doctorate in Leiden, receiving praise for a dissertation on philosophical knowledge of God according to Francisco Suárez, René Descartes, and their seventeenth-century reformed readers. Prior to his appointment at VU University, Goudriaan worked as a researcher at the theological faculty in Leiden and the philosophy faculty of Erasmus University Rotterdam. He is co-editor-in-chief of the academic journal Church History and Religious Culture (as continuation of the Netherlands Archives for Church History, a journal published since 1829), member of the editorial board of the Documentatieblad Nadere Reformatie and member of the advisory board of Theologia Reformata. Along with Prof. Dr. W. Balke and Prof. Dr. H. van den Belt, he forms the jury for the every third year awarded Prof. Dr. S. van der Linde thesis prize on the history of Protestantism.

Prof. Dr. Andreas Beck, Academic Dean and Director of the Institute of Post-Reformation Studies (IPRS) at ETF Leuven: “Dr. Aza Goudriaan enjoys international recognition as a specialist in early modern theology and philosophy. His scientific work has an interdisciplinary orientation and focuses on the long term (longue durée) of the history of theology, starting from the Early Church. We are particularly grateful that he has come to strengthen the IPRS at ETF through research into reformed orthodoxy and supervision of PhD students.”